Sky Defence used his tactical speed to grab a runway win against a solid field in the 42nd running of the $65,000 Winsham Lad Handicap at Sunland Park Racetrack Casino and Hotel on Sunday. 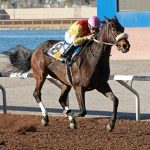 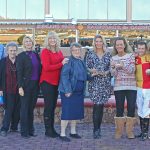 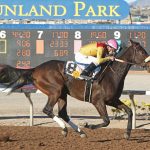 Let go at nearly 9-1, Sky Defence got loose at the top of the lane under jockey Ken Tohill and increased his advantage at the wire. The five-year-old bay gelding by First Defence won by an expanding 3 and 3/4 lengths in a rapid time of 1:35.31 for the one mile distance. Jockey Ken Tohill kept his mount forwardly placed throughout and began to pull clear at the half-mile marker.

Trained by Susan Arnett, Sky Defence seemed to get stronger as the race went longer. He paid $19.60 and earned $39,000 for owner Richard Lueck. The 7-time winner earned his first stakes triumph from his 20th career start.

L.A. Tower finished in second place with Jockey Roimes Chirinos, 4 lengths in front of Forest Mouse. The latter was seeking his third straight win in the Winsham Lad Handicap for trainer Henry Dominguez.

Everybuddys Talkin picked a lucrative time to break her maiden by winning the 46th running of the $206,852 Shue Fly Stakes at 400 yards. 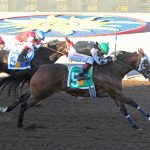 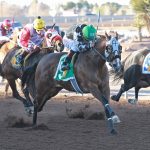 Under jockey Raul Herrera, the three year-old New Mexico Bred filly by Gonna Ro Sham Bo broke strongly and was in command early. The 7-1 shot turned the screws on her rivals and powered past Mountain Top Futurity winner Daddys Blushing to win by three-parts of a length. The Shue Fly victory was her first in 7 career starts. Everybuddys Talkin had recorded five second place finishes prior to the Shue Fly finale.

Daddys Blushing ran an admirable race and fought hard for trainer Jackie Riddle but had to settle for second. Francisco Calderon rode the runner-up who earned $37,233 for owner Gary Hartstack.

Regard the Rose, the even money favorite, was squeezed hard at the start and could not recover. The top qualifier finished in 8th place.