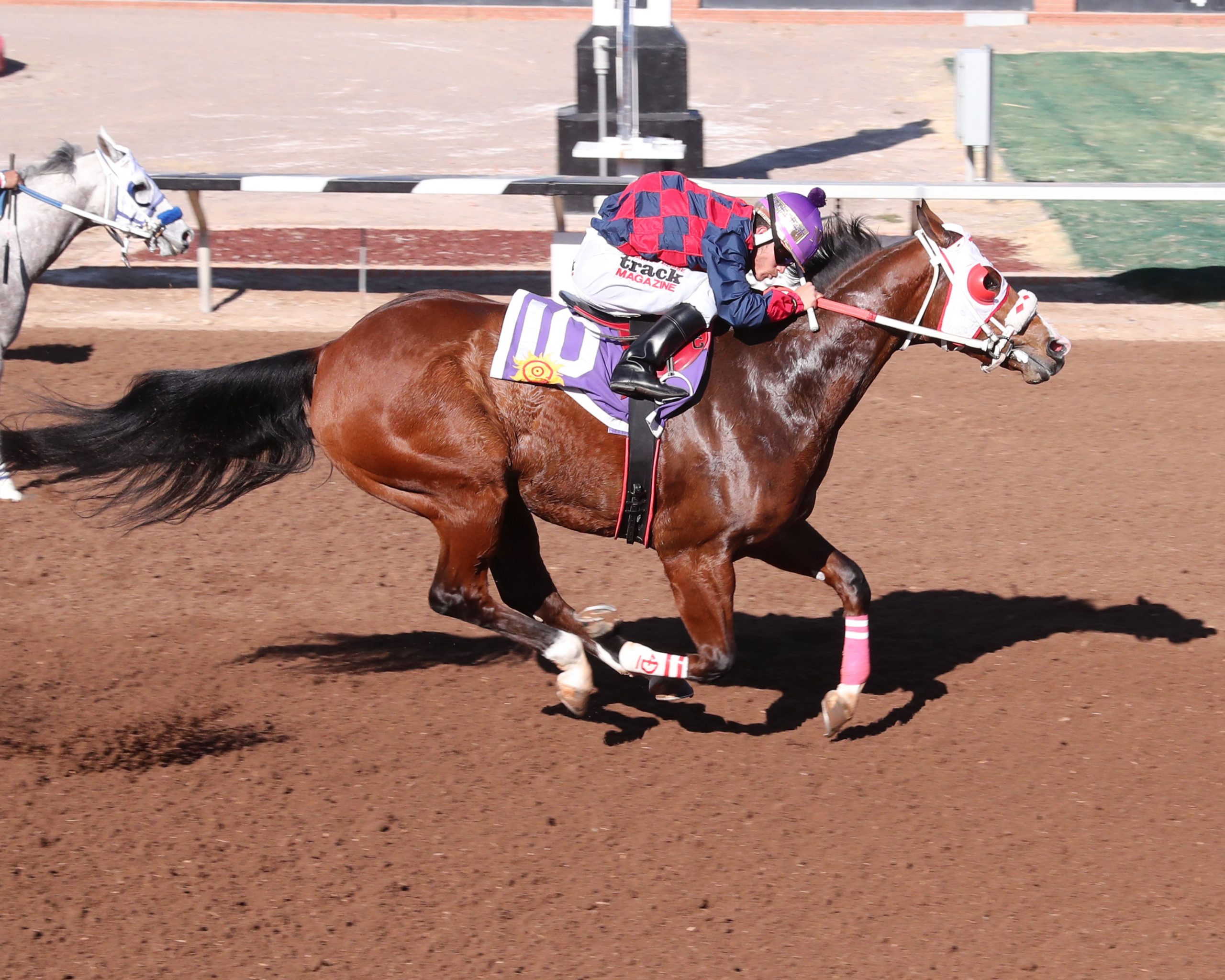 Getting away sharply from his outside post under jockey Noe Garcia, Jr., Lethal Avenger stormed home to an impressive 1 1/4-length win in Saturday’s 58th running of the $172,203 West Texas Derby (Grade III) at Sunland Park Racetrack and Casino.

Owned by J & SM, Inc., Don Reynolds and M. Lane Reynolds of Fort Stockton, Texas and trained by Fred Danley, Lethal Avenger got the absolute cleanest of breaks, dueled for the lead in the early running and inched clear for a sharp victory, racing 400 yards in a quick time of 19.27 seconds, earning an Equibase Speed Index figure of 105.

Lethal Avenger is a two-time stakes winning son of Volcom, bred in Texas and a winner of four straight races. He was the fourth fastest qualifier for the West Texas Derby when trials were held here on Jan. 14, winning that race by 1 ¼ lengths. Prior to that, Lethal Avenger was a sharp winner in the La Fiesta Futurity at Albuquerque Downs on Sept. 19.

Sent off as the 3.30-to-1 second choice in the wagering, Lethal Avenger returned $8.60 to his winning backers. He has won five times from nine career starts, and his $80,936 earnings in the West Texas Derby pads his lifetime bankroll to more than $254,900.

Morning line and post time favorite Muy Peligrosito, sent off at odds of 3-to-5, was eliminated just yards out of the gate when Makin A Candy Run and jockey Jaime Leos came over a bit, forcing Adrian Ramos to take back and lose position.

The fastest qualifier for the West Texas Derby rallied late and finished an unlucky third for trainer Eric Valenzuela.

Throwin Sumoke and jockey Jose Aldavaz finished second in the race. Sent off at odds of 19-to-1, the $2 exacta with the top two finishers returned a healthy $98.80.

Live racing at Sunland Park resumes Sunday with a nine-race program which gets underway at 12:25 p.m., headlined by the 19th running of the $100,000 La Coneja Stakes for older New Mexico-bred fillies and mares racing 6 furlongs.

A field of 10 will line up in the starting gate for the La Coneja, with trainer Todd Fincher sending out Slammed as the 2-to-1 morning line favorite. Owned by Fincher and Brad King, Slammed is a six-time winner from eight career starts with her most recent victories coming in the New Mexico Classic Cup Filly and Mare Championship last Oct. 31 at Zia Park as well as a pair of stakes wins last summer at the Downs at Albuquerque Downs.

The daughter of Marking, with earnings of more than $237,000, is coming off a fourth-place finish in her last start, facing open company in the Zia Park Oaks on Nov. 23.

Slammed will be making her first start as a 4-year-old in the La Coneja and will have a new pilot aboard as Alfredo Juarez, Jr. has the mount.  They will break from post seven in the La Coneja, which will go as the eighth race on the card with a scheduled post time of 3:31 p.m.