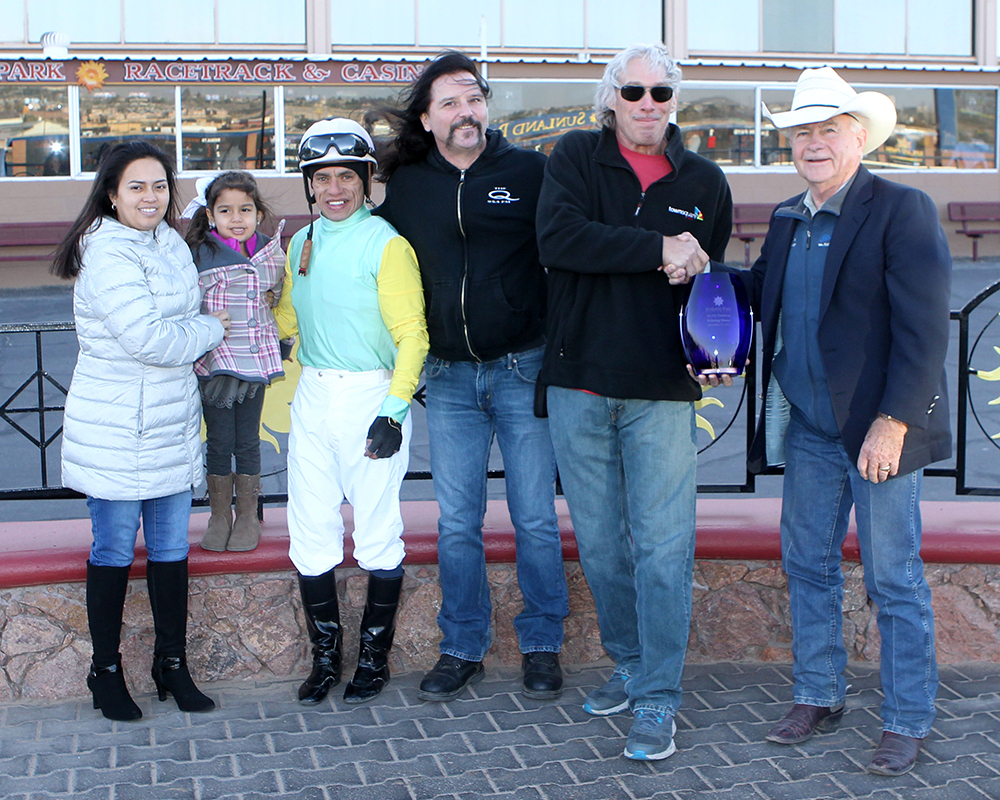 Racing, much like rodeo, is a rough sport. Neither are for the faint of heart.

Sunland Park trainer Shawn Davis has seen and felt the effects of how physically and mentally strong one must be to participate on the rodeo circuit.

In the 1960’s, growing up in Whitehall, Montana, Davis participated in the sport at some of the highest levels, achieving success both as a youth and a professional. He rode in his first competition at the age of 5, earning a few dollars breaking ponies and riding in 4H events.

Soon, Davis would be a high school and collegiate rodeo champion at both Montana State and the University of Western Montana before earning nearly $26,000 in his first full season competing in saddle bronc competitions.

“I always wanted to be a cowboy and loved riding horses,” Davis said.

“I was in a body cast for 4 months from my shoulders to my knees” Davis recalled. “The doctors didn’t operate for 6 weeks. The science was not as advanced back then. My back was completely dislocated.”

After months of recuperation, Davis not only learned to walk again, but he got back into the highest levels of rodeo competition, qualifying for the national finals 12 times in a career that spanned more than three decades.

“It’s one of those things I was lucky to get through,” Davis said. “I always believed I’d be able to ride again.”

As a rodeo star, Davis would become world champion saddle bronc rider three times and was inducted into the Pro Rodeo Hall of Fame in 1979.

After his competing days were over, Davis then became instrumental in the promotion of rodeo, serving first as the president of the Professional Rodeo Cowboys Association and currently as general manager of the National Finals Rodeo, a position he has held since 1986.

While maintaining the business and social aspects of the business of rodeo, The 75-year-old Davis is certainly no stranger to the racing business.

He literally grew up around it, being raised near the Texas home of one of the world’s leading international horsemen Nelson Bunker Hunt.

“We lived near the Circle S. Ranch in Texas which was owned by Hunt.”

“Gary Stevens rode to victory one of our first runners at Les Bois Park in Idaho during the 1980’s.”

The line from rodeo to racing was drawn for Davis at an early age.

“I heard plenty of racing stories from my granddad,” Davis recollected. “I took plenty of Quarter Horses through the sales ring as a youth and competed in match races. I will never forget beating the local Montana racing champ with our horse Maggie Kay.”

Davis took out his trainers license in 1991, and despite starting only a small number of horses in his career, has won more than 260 times with total earnings approaching $2 million.

“The New Mexico State Fair perked my interest in racing,” Davis said. “Before the rodeo, we would watch the races. I enjoy the horsemanship of figuring the horses out.”

In 2016, Davis’ runners have earned more than $250,000, with 18 winners including Chief Cicatriz, undefeated after four career starts, and most recently, winner of the KLAQ Handicap opening weekend at Sunland Park Racetrack and Casino.

Chief Cicatriz, a Kentucky-bred gelded son of Munnings, is owned by Roy Gene Evans, himself a longtime supporter of rodeo.

“He (Chief Cicatriz) might be the best horse I’ve ever had,” Davis recently said. “His times are fast. He meets his challenges really well. Evans supports Rodeo and Indian Culture and history.”

“He (Oilfield Assay) won his career debut. Both Ry Eikleberry and Pat Valenzuela worked him and liked him a lot. He should get even better with more distance.”

The idea is still true that both rodeo and racing are not for the faint of heart.

But longevity in the businesses matter, and Davis is an embodiment of that statement.