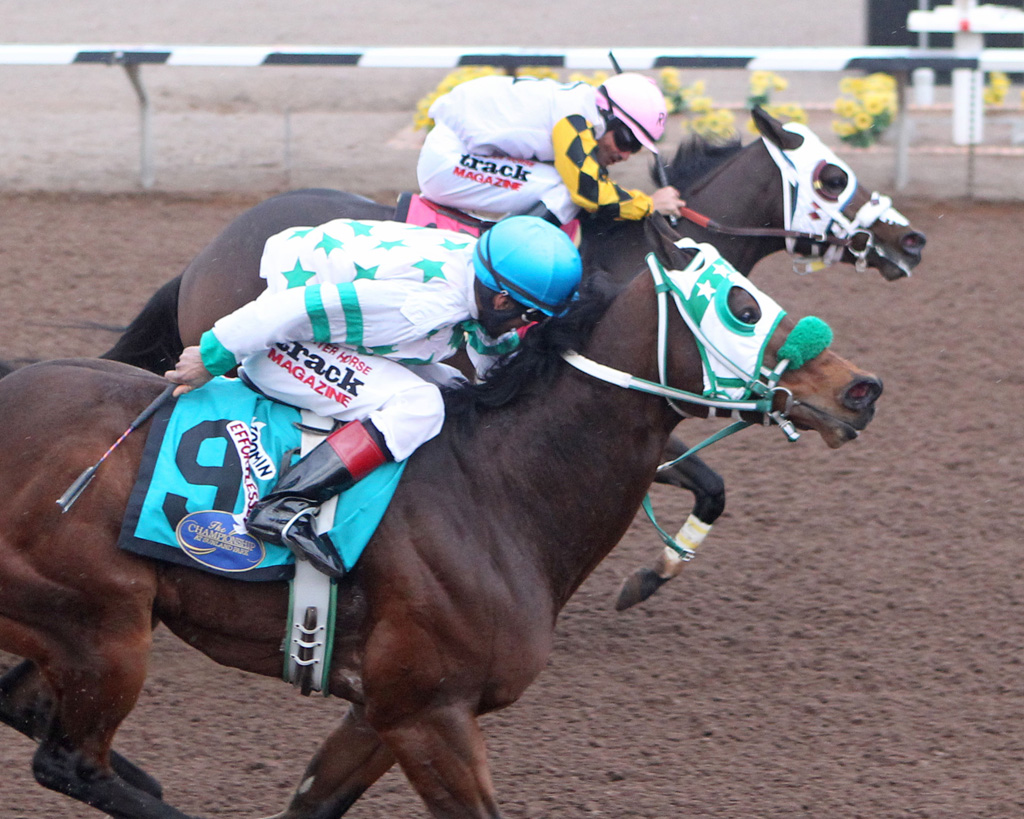 Jessies First Down made a strong argument for World Champion running Quarter Horse honors after defeating Zooming Effortlessly by a nose in a thrilling 16th running of the $350,000 Championship at Sunland Park (Grade 1) on Sunday.

With Rodrigo Vallejo in the saddle, Jessies First Down rocketed to the front at the start of the 440 yard classic. The 3-1 second choice poured on the speed and led by half a side through the stretch but Zoomin Effortlessly produced a wicked late run to make matters close. Jessies First Down held on for a photo finish win over his arch rival and defending champion Zoomin Effortlessly. Only four one-thousands of a second separated the top two finishers. The winner clocked the quarter mile in a fast 21.232 seconds, good for a 94 speed index. 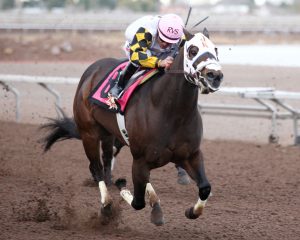 A proud winning owner Ted Abrams said in the winner’s circle, “He’s as fast as any horse in the United States. We never ducked the competition. He beat a lot of horses at a lot of racetracks. I think he deserves the title of World Champion Quarter Horse.”

Judd Kearl added, “He’s been training super. And just when I think he can’t get any better, he does.”

Jessies First Down earned $160,200 from his Championship at Sunland Park win. His career earnings are approaching $600,000. His immaculate record stands at 10 wins, 10 seconds and 1 third from 27 career starts. He won nearly $430,000 in 2016 alone and defeated Zooming Effortlessly twice. Loyal supporters of Jessies First Down received $8.80 on a $2 win ticket.

2-5 favorite Zoomin Effortlessly ran too good to lose. The runner-up ridden by Santos Carrizales broke in third place before mounting a serious charge in the final 100 yards. The big favorite caught fire in deep stretch and nearly got the job done. Zoomin Effortlessly earned $73,200 for Telesforo Perrett of Houston, Texas. 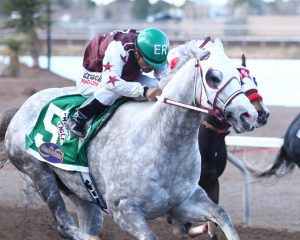 As usual, Imperial Eagle closed with determination and would not be denied in the 400 yard test. The two-year-old gelded son of One Famous Eagle picked up $120,000 for his connections. The freshman sensation completes his first year of racing with a staggering sum of $1,761,507 in earnings. He should receive serious consideration for World Champion 2-year-old gelding in 2016. He proved his mettle holding off a supreme bid from All American Futurity Juvenile winner Jm Mister Destiny.

The latter made the 4-5 favorite work but had to settle for second place honors. The runner-up was ridden by Manny Gutierrez and earned $44,000 for the J and M Racing and Farm.

Chainman finished a half-length back in third.

Princess Jesse won for the 5th time this year and earned a $51,000 payday. She won four stakes races this year and over a quarter million dollars.

Astica tried her best as the 1-5 favorite but could not deliver the winning punch. The classy mare and defending champion finished second, a nose in front Teana Fay.