Redneck Humor blasted away from the gates and never let up on the accelerator in route to a track record setting victory in the $75,000 Budweiser Handicap at Sunland Park Racetrack and Casino on Sunday.

With an aggressive ride from Miguel Perez, Redneck Humor was able to make every pole a winning one while taking the steam out of an elite field of sprinters going 6 furlongs. Last season’s Bill Thomas Memorial Handicap winner was brilliant once again winning by over 4 lengths and stopping the clock in 1:07.42, breaking the fresh track record set by Surf N Ski of 1:07.50 on January 14. 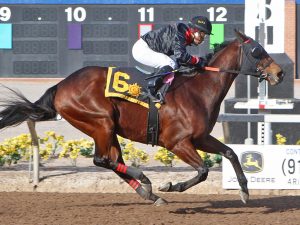 Racing at 3-1 odds, Redneck Humor rattled through fractions of 21.43 and 43.28 seconds for the first two points of call. Despite the pressured pace, the 6-year-old son of Da Stoop kept on firing through the lane and won impressively. Justin Evans trains the multiple stakes winner of over $263,000. Redneck Humor earned $45,000 on Sunday for owners Vanessa Evans, Earl Nuegebauer and K.W. Sharp.

Evans also saddled the second and fourth place finishers with Toews On ice and Flashy Indian. All three of his runners could return in the $100,000 Bill Thomas Memorial Handicap at Sunland Derby (Gr. III) day – Sunday, March 26. The all Justin Evans exacta paid $41 on a $2 ticket.

Indexical finished third after racing 6-wide on the far turn. Surf N Ski did not break alertly and was never a factor. He and jockey Ken Tohill finished fifth.