20th renewal of the $100,000 Mine That Bird Derby major step towards Sunland Derby

A field of six sophomores will take a massive step towards next month’s Grade 3, $700,000 Sunland Derby when they load into the gate for Sunday’s $100,000 Mine That Bird Derby, one of four thoroughbred stakes races at Sunland Park Racetrack and Casino.

Richard L. Davis’ Sir Rick, a three-time winner shipping in from Sam Houston Race Park, has been installed as the 2-to-1 morning line favorite in the Mine That Bird Derby. Trained by Robertino Diodoro and slated to be ridden by Francisco Arrieta, Sir Rick is coming off a runaway victory in his first start of the year over allowance rivals at Sam Houston.

Prior to that, the 3-year-old Kentucky-bred colt by Paynter finished third in the Jean Laffite Stakes last November at Delta Downs in Louisiana. He broke his maiden in his second career start at Louisiana Downs last summer before beating conditioned allowance runner at Delta Downs last October.

Sir Rick will break from post 4 in the Mine That Bird Derby, which will be run at a distance of 1 1/16 miles.

The Mine That Bird Derby is the final stepping stone race leading to the Grade 3, $700,000 Sunland Derby, which will be run March 22nd. The Sunland Derby serves as a major prep towards the Kentucky Derby, with the race offering qualfying points to the top four finishers.

Drawn just to the inside of Sir Rick in the Mine That Bird Derby is Exaulted, coming in off a second place finish in his career debut last month at Santa Anita Park.

Scheduled to be ridden by Hall of Famer and New Mexico native Mike Smith, Exaulted was well-meant second place behind Nadal, considered to be among the leading Derby prospects from the barn of Bob Baffert. Nadal recently scored a stakes win in the Grade 2 San Vicente Stakes. 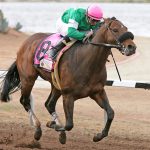 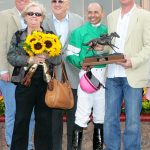 Smith, born in Dexter, New Mexico in 1965, is widely considered as one of the greatest jockeys in the history of thoroughbred racing. A winner of more than 5400 races with earnings topping $312 million, Smith won thoroughbred racing’s most prestigious title aboard 2018 Triple Crown winner Justify. He has the most Breeders’ Cup wins (26) of any rider in the history of the sport.

Exaulted was bred in Kentucky and is owned by CRK Stable LLC. The son of Twirling Candy will be making his first start against winners and first around two turns. He is listed at 7-to-2 on the morning line.

Stackin Silver also comes in from Santa Anita, where he was a romping winner in his most recent start.

The son of Union Rags, owned by Slam Dunk Racing as well as Jerry McClanahan and Michael Nentwig, owns two wins from three career starts. Trained by Richard Baltas, he broke his maiden last November at Del Mar before beating starter allowance competition in his first start of his 3-year-old campaign.

Stackin Silver will be ridden by Heriberto Figueroa and will break from post 2 in the Mine That Bird Derby, which will be run as the 9th race of a 10-race program and has a scheduled post time of 4:36 p.m. local time.

Jungle Runner is a major threat for trainer Steve Asmussen. The proven stakes winner gets Luis Contreras in the irons.

Earlier in the Sunday program, Dynasty of Her Own will be looking for her second stakes win at Sunland Park when she arrives at the starting gate as the 3-to-1 morning line favorite in the 15th renewal of the $75,000 Island Fashion Stakes. 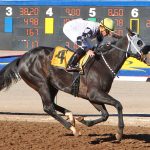 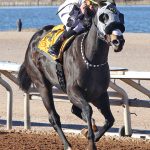 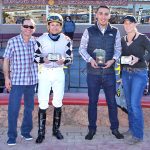 The unbeaten daughter of Shanghai Bobby was a romping winner in the Borderplex Stakes last time out. Owned by Tommy Town Thoroughbreds and trained by Jonathan Wong, she broke her maiden in her career debut last November at Golden Gate Fields in northern California. Dynasty of Her Own will be ridden again by Arrieta and will break from the 5 hole in the 7-horse field.

Sunland Park’s leading thoroughbred trainer Justin Evans is represented in the Island Fashion Stakes with 7-to-2 morning line second choice Showmethemagic, third place finisher in the Borderplex Stakes and a two-time winner from four career starts. A daughter of Power Broker owned by Vanessa Evans and Ken Tevelde, Showmethemagic will break from the rail under Ry Eikleberry.

Caribbean Sea ships in from Oklahoma for WinStar Stablemates Racing and trainer Steve Asmussen. The daughter of Hard Spun broke her maiden at Remington Park last November before finishing second in the Trapeze Stakes to close out her juvenile campaign. She will be ridden by Luis Conteras and is listed as the co-second choice on the morning line.

The Island Fashion Stakes, at a distance of one mile, will go as the seventh race on the card with a scheduled post time of 3:42 local time. The Island Fashion serves as a final prep for the $200,000 Sunland Park Oaks, which is slated for March 22nd.

In other stakes action Sunday, a field of eight state-bred older runners, headlined by Rig Time, will face the starter in the 16th edition of the $100,000 Albert and Henry Dominguez Handicap, run at the distance of 1 1/16 miles. 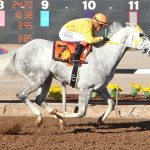 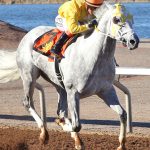 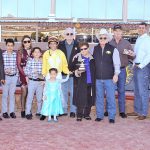 Rig Time, trained by Weston Martin for owners Larry and Harry Teague, is seeking his second stakes win this season. The son of Right Rigger was a 4-length winner of the Johnie Jamsion Handicap here last month. In all, Rig Time has won seven times from 20 starts and has amassed more than $297,000 in career earnings. Slated to be ridden by Eikleberry, Rig Time is drawn on the far outside in the 8-horse field and has been installed as the 3-to-1 morning line choice.

Blazing Navarone will be looking for a second straight victory in the Dominguez Handicap. The 5-year-old son of Navarone, owned by Barbara Coleman, has earned more than $561,000 while scoring 11 wins in his 24-race career.

Trained by Martin Valdez-Cabral, Jr., Blazing Navarone will break from post 6 as the 4-to-1 second choice in the Dominguez, scheduled to go as the 8th race at 4:09 p.m.

Sunday’s stakes quartet is wrapped up with a full field of New Mexico bred 3-year-olds in the 18th renewal of the $100,000 Red Hedeman Mile.

Casey Lambert trains Ancient Land, the 3-to-1 morning line favorite for owners Martin Riley, D. Carroll, C. Scott and J. Howard. The son of Monterey Jazz is in search of his third straight win, including a recent score at Sunland Park last month in the 4 Rivers John Deere Stakes.

Go Now Go is the 4-to-1 second choice in the Hedeman. Trained by Todd Fincher for B. J. McQueen, Dale F. Taylor Racing and Glen Robertson, the son of Laugh Track is coming off a narrow win over allowance rivals here. Prior to that, he was second best in the Steve Prather Stakes at Zia Park last December. He will break from post 2 under Shane Laviolette.

Sunday’s stakes laden card is preceded by a strong Saturday card, which is headlined by the 18th renewal of the Mesilla Valley Speed Handicap.

Cat Daddys Lil Girl, looking to extend her current win streak to three races, is the lukewarm 4-to-1 morning line choice. Owned by Jimmy Negrete and Jimmy Vasquez and trained by Cynthia Gonzalez, the 4-year-old filly by Big Daddy Cartel scored a convincing win in the Lou Wooten and Sydney Valentini Handicap here, running her career ledger to six wins from 13 starts and earnings topping $305,000. 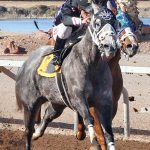 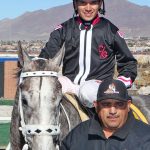 Slated to be ridden by Mauro Salcedo, Cat Daddys Lil Girl will break from post 3 in the Mesilla Valley, which goes as Saturday’s 4th race at a scheduled post time of 2:20 p.m.

First post time for both the Saturday and Sunday programs are listed at 1 p.m. Live racing resumes on Friday at 1 p.m.