Sir Rick scores impressively in $100,000 Mine That Bird Derby

Sir Rick stamped his ticket to the $700,000 Sunland Derby (Gr. III) on March 22 after a smashing 4-length win in the $100,000 Mine That Bird Derby on Sunday at Sunland Park Racetrack and Casino.

The three-year-old Paynter colt bullied his rivals with a sharp turn of foot in the final quarter mile of the one mile and one-sixteenth prep to the Sunland Derby (Gr. III). Under jockey Francisco Arrieta, Sir Rick blasted away from Top Draw in upper stretch and never looked back. He won with speed in reserve and paid $5.40 to win as the 8-5 favorite. 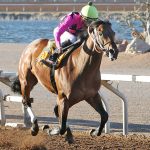 The sharp sophomore was coming off a big 5 length win at Sam Houston earlier this year. He is trained by Robertino Diodoro. The winner earned $60,000 for owner Richard Davis. He clocked the distance in 1:44.23.

Top Draw ran a gallant second for Judge Lanier Racing. He was prominent throughout and never quit. He finished over three lengths in front of Stackin Silver.

Trainer Justin Evans scored big in the $75,000 island Fashion Stakes as his two fillies finished first and second. Shanghai Keely and jockey Jimmy Ray Coates held off a late charge from Brave Cinderella to win the Prep race for the Sunland Park Oaks. Shanghai Keely roared from off the pace and won by three parts of a length in a stirring finish to the one mile race for three-year-old fillies. The 5-1 shot paid $12.60 to win. 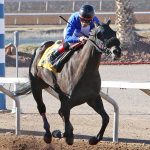 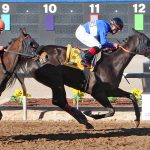 Brave Cinderella completed the all Justin Evans exacta which paid $142.80. The runner-up is also owned by Stable HMA. She finished nearly 6 lengths in front of 4-5 favorite Dynasty of Her Own who was coming off a win in the Borderplex Stakes

On the undercard, Blazing Navarone collected an easy win in the $100,000 Albert and Henry Dominguez Memorial Handicap. Under Ry Eikleberry, the multiple stakes winner coasted on a soft early pace and simply roared home in the stretch earning $60,000 for owner Barbara Coleman of Farmington, New Mexico. Martin Valdez Cabral, Jr. trained the winner. The 3-1 shot paid $8.80 to win. Rig Time finished up a distant second. 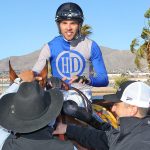 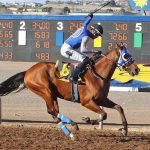 Let go at nearly 15-1 odds, Effort N Results earned an upset win in the $100,000 Red Hedeman Mile. The New Mexico-bred son of Shame on Charlie roared from off the pace under jockey Ken Tohill to win the $60,000 winner’s prize. Joel Marr trains for owner Terry Adams.