Susans Violette continued her dream season at Sunland Park Racetrack and Casino with a determined victory in the $100,000 La Coneja Stakes.

Under jockey Enrique Gomez, Susans Violette pushed the pace from the get go in the 6 furlong feature for New Mexico-bred fillies and mares. The 7-5 favorite responded in kind with a wire to wire victory holding off Orogrande by a neck. The five-year-old Stellar Rain mare also had to fend off major threats from Sexy Bikini Model and I’m A Dancin Who. That duo finished a close third and fourth, respectively in a blanket finish. The winning time was 1:09.92. The top four finishers were separated by less than one length at the wire. 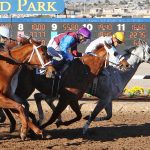 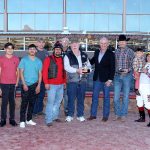 In total, Susans Violette has won 7 races from 12 starts with earnings topping $312,000. She is the leading New Mexico-bred sprinting mare.

Orogrande fought valiantly racing between horses through the stretch drive but could only manage second place for trainer Dallas Barton.