Fighting for every bit of ground in the 400-yard affair, jockey Jose Aldavaz got the most from Major Bites who narrowly took top honors in Saturday’s 23’rd running of the $100,000 Jess Burner Memorial Handicap.

Trained by Gerardo Ochoa-Pena for owner Israel Bordier, Major Bites got away from the gate in good order, rallied to get alongside the leaders in the early yards, put a head in front midway down the stretch and battled to the wire, fending off all challengers to prevail by a nose, just in front of Freedom Flash and jockey Alonso Rivera.

A New Mexico-bred son of Jesse James Jr, the Sunland Park winners circle is a familiar place for Major Bites. Last year, he won the Mesilla Valley Speed Handicap for a second consecutive year. Prior to that, he had placed in both the Championship at Sunland (Grade I) and the Dona Ana County Stakes during the 2018-19 season.

Freedom Flash finished just ahead of third place finisher Rime Chimes, completing a $2 exacta payout of $162. Rime Chimes, sent off as the narrow post time favorite under Paul Nieto, crossed the finish line in third, narrowly ahead of Jess A Satin Flash.

Chasing fast fractions early and making up ground with every stride in the stretch, Tee Em Eye and jockey Enrique Gomez score a longshot victory in Saturday’s 28th renewal of the $65,000 Bold Ego Handicap.

Owned and trained by Jose Silva, Tee Em Eye was allowed to lope along early as post time favorite Into Mystic was hooked up in a pace battle with Woman At the Well and Cashcheckorcharge through a fast opening quarter mile of 22.08 seconds. Gomez began guiding Tee Em Eye off the rail as she was making up ground on leaders.

She’s My Gem, never too far away from the early pace, also threw her hat into the ring as she briefly looked to take command mid-stretch.

Tee Em Eye continued to chew up ground, getting past She’s My Gem in the shadow of the wire, winning by a half-length and racing the 5 1/2 furlongs in a final time of 1 minute, 5.8 seconds. 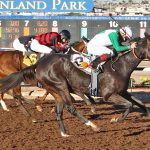 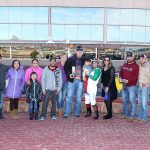 A California-bred mare by Cyclotron, the 7-year-old has seen more than her share of winners circles in her 36-race career. In her most recent start last month at Turf Paradise, she scored an upset win in the Phoenix Handicap. Last spring, she captured the Prescott Valley Handicap at Arizona Downs. In 2019, Tee Em Eye racked up eight wins from 15 starts.

Sent off as the fifth choice in the field of seven, Tee Em Eye returned $32.20 to her winning backers. She’s My Gem, ridden by Ry Eikleberry, narrowly held the place, securing a healthy $150.40 return on each $2 exacta wager.

Into Mystic held on for the show, with Cashcheckorcharge rounding out the top four.

A field of 11 will face the starter in the Four Rivers John Deere Stakes, with Ancient Land listed as the 5-to-2 morning line favorite. Ancient Land will be ridden by Luis Contreras for trainer Casey Lambert.

The featured event will go as the ninth race on the card and is scheduled for 3:50 pm local time, with first post time at 12:25 p.m.