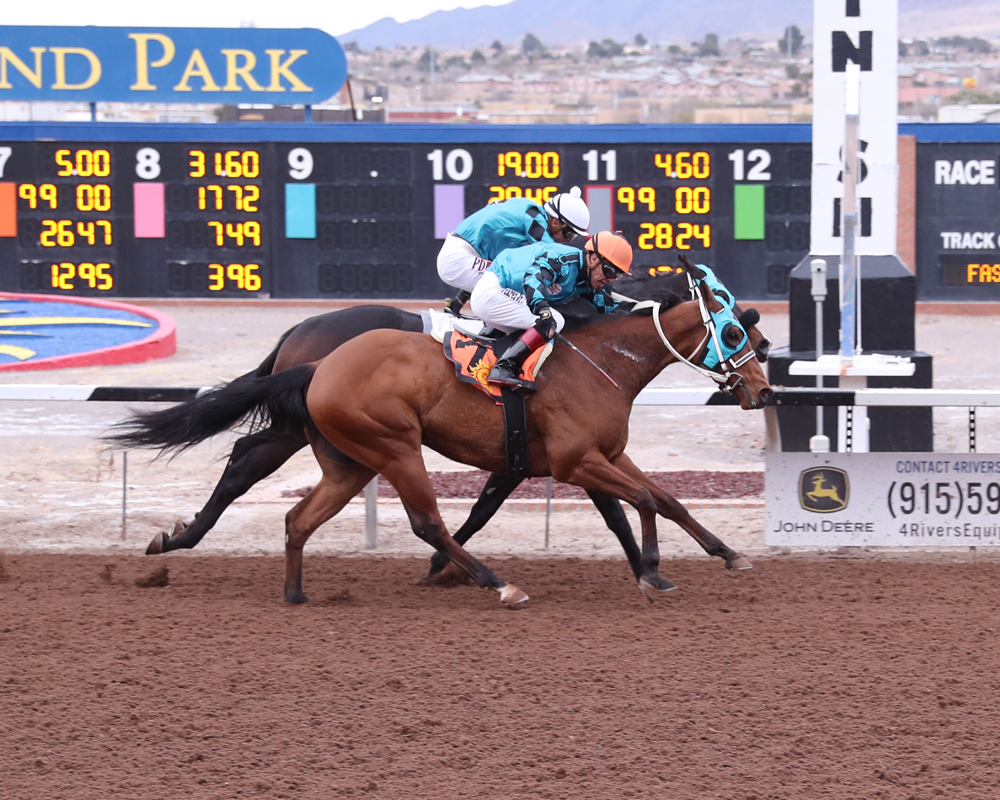 Todd Fincher held a strong hand in Sunday’s 21st edition of the $100,000 Corralito Steak House Stakes, one of two stakes races on the Sunland Park Racetrack and Casino card. One of the leading trainers in the state of New Mexico, Fincher proved best and second best with Bye Bye Matty P and jockey Alfredo Juarez, Jr. narrowly prevailing over stablemate Massive Roar and jockey Roimes Chirinos.

Bye Bye Matty P, prominent throughout the sprint, dueled for the early lead with Massive Roar before that one kicked clear midway through the far turn after a half mile time of 44.68 seconds.

Juarez got busy aboard the New Mexico-bred son of Attila’s Storm midway down the stretch, getting a nose in front at the finish line, running the 6 furlongs in 1:09.75. Sent off as the 3-to-2 second choice, Bye Bye Matty P returned $5 to his winning backers.

Bye Bye Matty P is a three-time winner from five career starts. He broke his maiden and earned a stakes win in his debut start last April at SunRay Park and Casino, winning the Ken Kendrick Memorial Stakes. He most recently scored an allowance win for owners B4 Farms, LLC out of Abilene, Texas. Sunday’s win pads the bankroll for Bye Bye Matty P to more than $124,000.

Massive Roar settled for second as the Fincher-trained $2 exacta returned $53.40.

In the co-featured 29th running of the $65,000 Bold Ego Handicap, Count Them Again, who was forced to race from well off the early pace after a troubled start, rallied down the stretch and earned a win via disqualification.

The first-place finisher and post time favorite Five Pics Please was disqualified by the stewards for interference shortly after the start. Five Pics Please and jockey Karlo Lopez, who broke next to Count Them Again in the starting gate, crossed over into her path, forcing jockey Erick Medellin to take up sharply moments after the start.  Count Them Again, after that tardy beginning, began her rally into the far turn of the 5 1/2 furlong sprint and was making up ground with every stride, finishing second just a nose behind Five Pics Please.

After a lengthy review by the stewards, the decision was made to change the order of finish, which resulted in Count Them Again, sent off at odds of 17.40-to-1 to be named the official winner, returning $36.80 to her winning backers.

Five Pics Please was placed second by the stewards, resulting in a healthy $2 exacta payoff of $114.60.

Owned by Lola and Alexandria Cuellar and trained by Raul Vega, Count Them Again snapped a three-race losing streak which included a pair of second place finishes last summer in the Lincoln Handicap at Ruidoso Downs and the Carlos Salazar Handicap at Albuquerque Downs. The New Mexico-bred daughter of Premeditation earned her last win at SunRay Park and Casino, where she won the Foutz Distaff Handicap last April.  Count Them Again has nine career wins from 16 starts with lifetime earnings topping $367,000.

Five Pics Please, who was sent off as the 4-to-5 post time favorite, had the lead from the start of the Bold Ego Handicap, dueling with Harking through an early fast quarter mile of 21.8 seconds. Five Pics Please appeared to put away her competition at the head of the stretch but was nearly caught in the shadow of the wire by Count Them Again. Five Pics Please ran the 5 1/2 furlongs in a final time of 1:02.79 seconds.

Flyin Falynn and Harking rounded out the top four finishers.