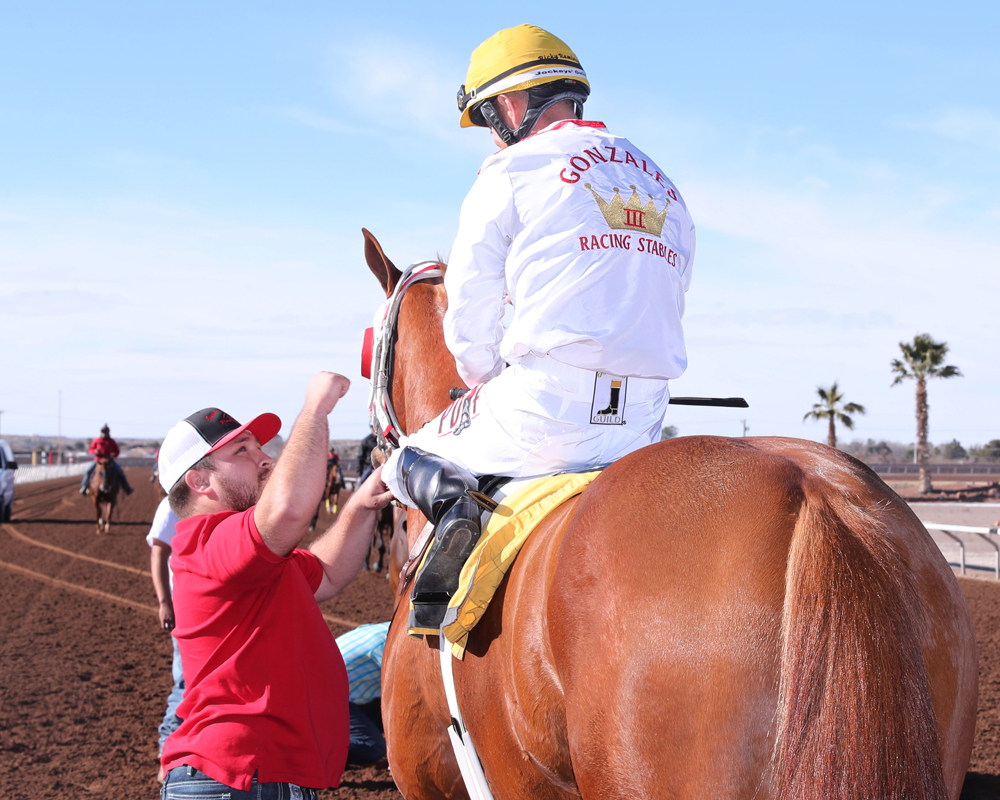 Quarter Horse Hall of Fame rider Ricky Ramirez showed why he is regarded as one of the all-time greats Saturday, guiding Colby James to an impressive win in the $100,000 Red or Green Stakes at Sunland Park Racetrack and Casino. Despite a bit of a slow break, Ramirez got busy early aboard Colby James, rushing up between rivals to get into contention and staying aggressive down the stretch, posting a half-length victory over 33-to-1 longshot Perrys Regard.

Colby James, owned by Rex Wells and trained by James Gonzales III, earned his seventh win from 19 career starts, racing the 400 yards on a fast track in a final time of 19.35 seconds, earning an Equibase Speed Index figure of 103. James Gonzales is the young son of former Sunland Park riding great turned trainer J.J. Gonzales.  James finished in a tie for first in the trainer standings at the recently concluded Lone Star Park Quarter Horse meet.

Colby James was coming into the Red or Green Stakes off a disappointing effort at Lone Star Park last time out, finishing ninth over a sloppy racetrack in the Grade 1 Refrigerator Invitational. Prior to that, the New Mexico-bred son of Jesse James Jr was a close second in the Grade 1 Namehimastreaker New Mexico Classic Championship Stakes on Oct. 31 at Zia Park.

Sent off as the third choice in the wagering at odds of 2.80-to-1, Colby James returned $7.60 to his winning backers. The $2 exacta with runner-up Perrys Regard returned a healthy $207.40.

Bigg Dee finished third, just ahead of Fly On Down to round out the top four. Morning line and 2-to-1 post time favorite Marcus Medallion was eliminated shortly after the start when forced to take back between horses under jockey Adrian Ramos and was never a factor.

Trained by Greg Green and slated to be ridden by Enrique Gomez, Wheres Brayden will break from the far outside post.

An earner of more than $168,000 in his career, Wheres Brayden is the 5-to-2 morning line favorite in the Corralito Steak House Stakes, which goes as the eighth race scheduled to go to post at 3:31 p.m.

Just prior to that event, a field of talented older filly and mare sprinters will race 5 1/2 furlongs in the 29th running of the $65,000 Bold Ego Handicap.

Five Pics Please is the 2-to-1 morning line favorite in the Bold Ego coming off a solid second place effort last time out in the Sun Devil Sprint on the grass at Turf Paradise in Phoenix, Arizona.

Jockey Karlo Lopez has the mount aboard Five Pics Please for trainer Robertino Diodoro. The Bold Ego goes as the seventh race on the Sunday card with a scheduled post time of 3:04 p.m.