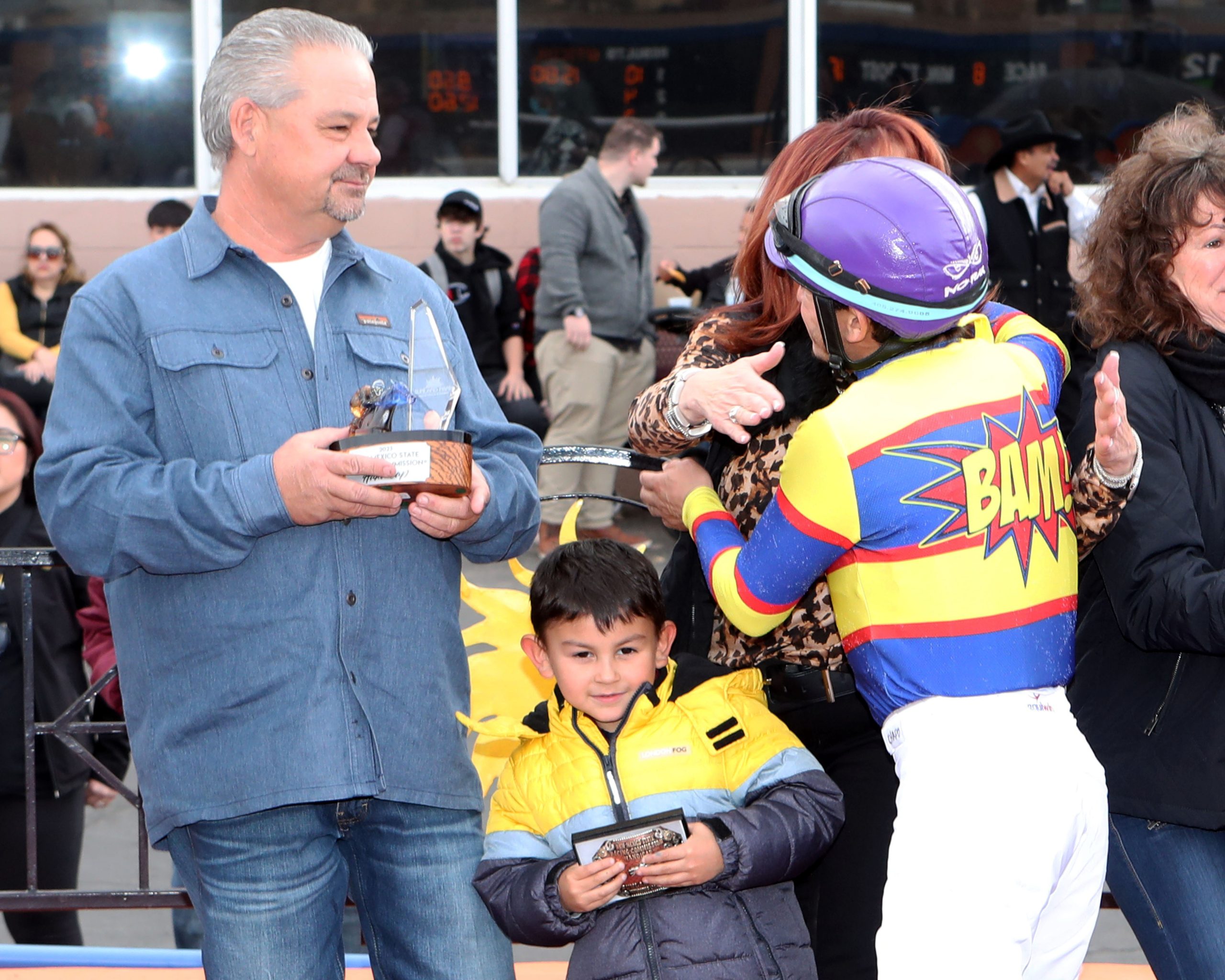 Chasing a group of leaders, which included the pacesetting duo of Quatro and Tight Fittin Jeans through an opening quarter mile of 21.98 seconds, Gomez nudged Bikini Time from the middle of the racetrack and downs towards the inside on the far turn.

As the early leaders continued to battle on the lead at the head of the lane, Gomez was making up ground aboard Bikini Time, grabbing the lead inside the final furlong before inching clear in the final yards to win by 1 1/4 lengths. The Bart Hone trainee crossed the finish line in a final time of 1 minute, 3.6 seconds for 5 1/2 furlongs.

A 5-year-old daughter of Atilla’s Time, Bikini Time earned her fourth win from 10 career starts. Sunday’s victory ended a prolonged losing streak, dating back to her last win which occurred at Sunland Park on March 20.

Quatro held on for the place under jockey Harry Hernandez. The $2 exacta with the top pair of finishers returned $183.40.

Jockey Harry Hernandez scored an impressive stakes win on Sunday with late-running Minister of Soul, who ran down pacesetting Good Bye Charlie to win the 32nd running of the $65,000 KLAQ Handicap.

Owned and trained by Estaban Martinez Valdez, Minister of Soul raced midpack down the backstretch while Good Bye Charlie and Danz at Colfax were dueling through a very fast opening quarter mile of 21.64 seconds. Hernandez swept to the outside of Good Bye Charlie while making up ground with a furlong to go, then passed the leader in the final 100 yards before inching clear to a 1 1/4 length win, stopping the timer for 5 furlongs in 57.06 seconds.

Minister of Soul, a 9-year-old California-bred gelding by Ministers Wild Cat, picked up his 16th lifetime win from 51 starts. He has now won two straight races, coming off a romping win at Turf Paradise last time out. Sunday’s win increases his career earnings to more than $500,000.

Bet down to the 4-to-5 post time favorite, Minister of Soul returned $3.60 to his winning investors. Good Bye Charlie held on for the place under jockey Felipe Valdez. The $2 exacta with the top pair of finishers returned $28.

No Pasa Nada finished evenly to save third, while Competitive Idea finished a well-beaten fourth.

Live racing resumes Tuesday with a nine-race card of thoroughbred action which will get underway at 12:25 p.m.