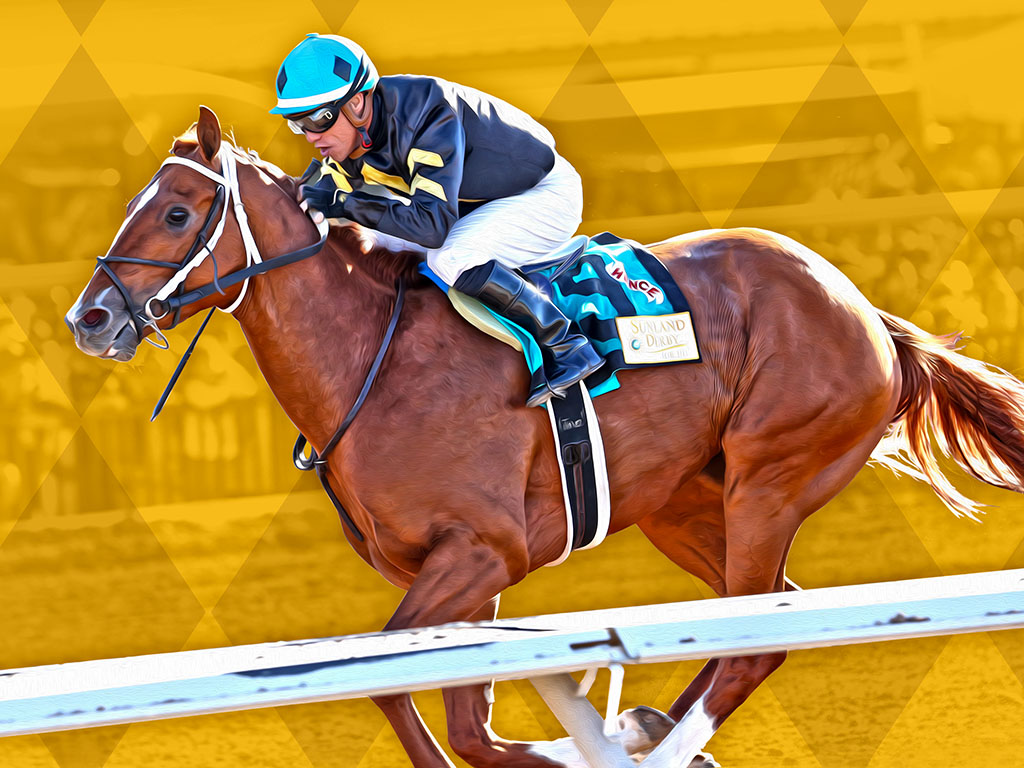 Prospects for the Sunland Derby

Hall of Famer Steve Asmussen could be sending two quality three-year-olds in New York Central and Dream Baby Dream. New York Central has already carved out two wins from four starts. The Tapit colt recently won an allowance at Oaklawn Park going one and one-eighth miles, the same distance as the Sunland Derby (Gr. III). He has a strong cruising speed and broke his maiden at Churchill Downs last fall. The winner of $104,600 is owned by WinStar Farm, China Horse Club International and SF Racing. The grey roan colt has been working forwardly since his last Oaklawn win on Feb. 19.

Dream Baby Dream is another imposing Asmussen runner with recent Oaklawn Park form. The Into Mischief colt is very fit coming off three straight third place finishes to stablemates New York Central and Title Ready and the Risen Star Stakes winner Bravazo. The battle tested sophomore is also a maiden winner from Churchill Downs and has a strong stretch kick.

Prince Lucky represents the Todd Pletcher stable. The Pennsylvania bred son of Corinthian is a restricted bred stakes winner at Parx and is a 3-time winner from 5 starts. The winner of nearly $135,000 has a good looking form line and split the field in the Grade 3 Lecomte Stakes at the Fair Grounds on Jan. 13.

D. Wayne Lukas has a solid prospect with Kentucky Club. The Oxbow colt owned by Calumet Farm packs a solid late kick. He finished 6th in the Grade 3 Southwest Stakes.

Bob Baffert looks to send Restoring Hope for Sunland Park’s biggest race. The son of Giant’s Causeway drilling Santa Anita maidens by over 3 lengths on Feb. 2. The victory came at one mile and one sixteenth, and Restoring Hope was full of run in the final furlong. He should be a big threat on March 25. His 5 workouts following that maiden win have been exceptional. Restoring Hope is owned by Gary and Mary West. Ax Man is another potential starter from the Baffert stable. Baffert has won the Sunland Derby (Gr. III) three times, most recently with Chitu in 2014.

Simon Callaghan’s All Out Blitz will receive ample betting attention. He was a runner-up to McKinzie in the Grade 3 Sham Stakes at Santa Anita and came in third in the Grade 2 San Vicente Stakes. In his maiden win at Los Alamitos last December, the Concord Point gelding beat Restoring Hope by a nose. All Out Blitz outran Southwest Stakes winner My Boy Jack in the Sham Stakes. Trainer Callaghan saddled 2015 Sunland Derby (Gr. III) Firing line who would go on to finish second to American Pharoah in the Kentucky Derby.

Local hopes rest with Todd Fincher’s Runway Ghost. The Ghostzapper colt was a runway winner of the $100,000 Riley Allison Derby and finished second to Reride in the $100,000 Mine That Bird Derby.

Local sensation Blamed is an early favorite for the $200,000 Sunland Park Oaks at one and one-sixteenth miles. The three-year-old daughter of Blame rolled through confident victories in the $65,000 El Paso Times Stakes and the $75,000 Island Fashion Stakes. Joel Marr trains the sharp filly for long-time Sunland Park horse owner Cleber Massey.

A free handicapping seminar starts at 11 a.m. on Sunday, March 25 in the Signature Showroom. The informative session will be hosted by racing personalities Tom Dawson, Robert Geller and Julie Farr. First post time on Sunday is 12:30 p.m. The Sunland Derby (Gr. III) will be the 11th of 12 races on the card with a starting time of 5:15 p.m.

The annual Sunland Derby Gala happens on Friday, March 23 at 6:30 p.m. in the Turf Club. Come meet Pat Day, one of America’s most successful thoroughbred jockeys of all time and Neal McCoy, 1998 & 1999 Country Music Entertainer of the Year!

The event is a semi-formal affair with all proceeds benefiting the Alzheimer’s Association. The celebrity guest entertainer is Neal McCoy – Country Music Legend and Big Band Crooner. Also in attendance will be Pat Day, four-time winner of the Eclipse Award for Outstanding Jockey and a National Museum of Racing and Hall of Fame inductee. The doors open at 6:30 p.m., kicking off with a silent auction and celebrity meet and greet. Neal McCoy takes the stage for a live performance at 8 p.m. Tickets are $100 per seat with tables and sponsorships available for purchase.